Ever since Gloria Walker was a little girl, she has wanted to go to Egypt. Her son is making that dream a reality. 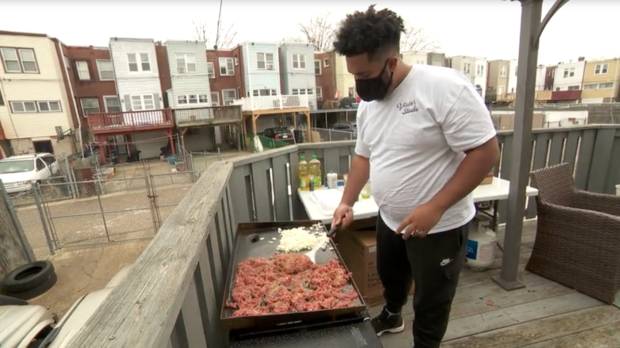 Last year, after Walker was told that she had late-stage bladder cancer, her son Dustin Vitale asked her: “If there’s one thing in the world you can do, what would it be?'”

“She said, ‘I’d like to see the pyramids’,” he said. “Ever since she was a little girl, she’s wanted to see them.”

But she did not want to travel alone or just go with her husband, Tone. She wanted to go with her whole family.

Vitale, who works as a middle school teacher in Philadelphia could never afford to pay the trip expenses for 14 family members. So, he decided he could raise the money by selling cheesesteaks.

Vitale said his campaign started on his Instagram story, which friends, family, and his students helped to spread.

Almost immediately cars started double-parking outside his house. Faces he didn’t recognize started showing up at his front door.

“We ended up doing 94 in one day and we were like just blown away,” Vitale said.

A food truck operator offered his services and in just six weeks Vitale raised all the money he needed and then some.

Their trip is planned for later this year. His mother says Cleopatra never had it so good.

“The love, it’s overwhelming, you know,” she said.

Dr Holly’s Show Notes – August 3rd, 2022
New Mexico city famous for link to UFOs honours N.B. ufologist Stanton Friedman
Freedom Convoy protesters set to return to Ottawa for Canada Day, stay through summer
B.C. man one of the first Canadians to receive compensation for vaccine injury
A New Mystery Signal Is Repeating From a Distant Galaxy, And It’s a Weird One
Glowing UFO disc spotted in Bangkok, eyewitness says alleged alien ship flew higher than clouds
Convoy organizer Tamara Lich to receive George Jonas Freedom Award
Important nutrients for the body to function effectively
Mysterious UFO spotted by man who claims he saw ‘light show like you wouldn’t believe’
Rescue of little girl from well called ‘Easter Miracle’
What are the benefits of selenium (Dr Holly on NFTS)
Black Holes Are Proof We’re Living in a Holographic Universe
Everything You See Is From 15 Seconds in the Past, New Research Claims
TRUCKERS WERE RIGHT: Freedom Convoy protest was legal, judge says, and Ottawa is now being sued
‘We’re closing in on them’ says UFO expert on Pentagon findings
Family Shares Harrowing, Heartwarming Story After Delivering Son on Side of Road
‘Doing My Duty’: Rajasthan Cop Hailed For Rescuing Child During Karauli Violence